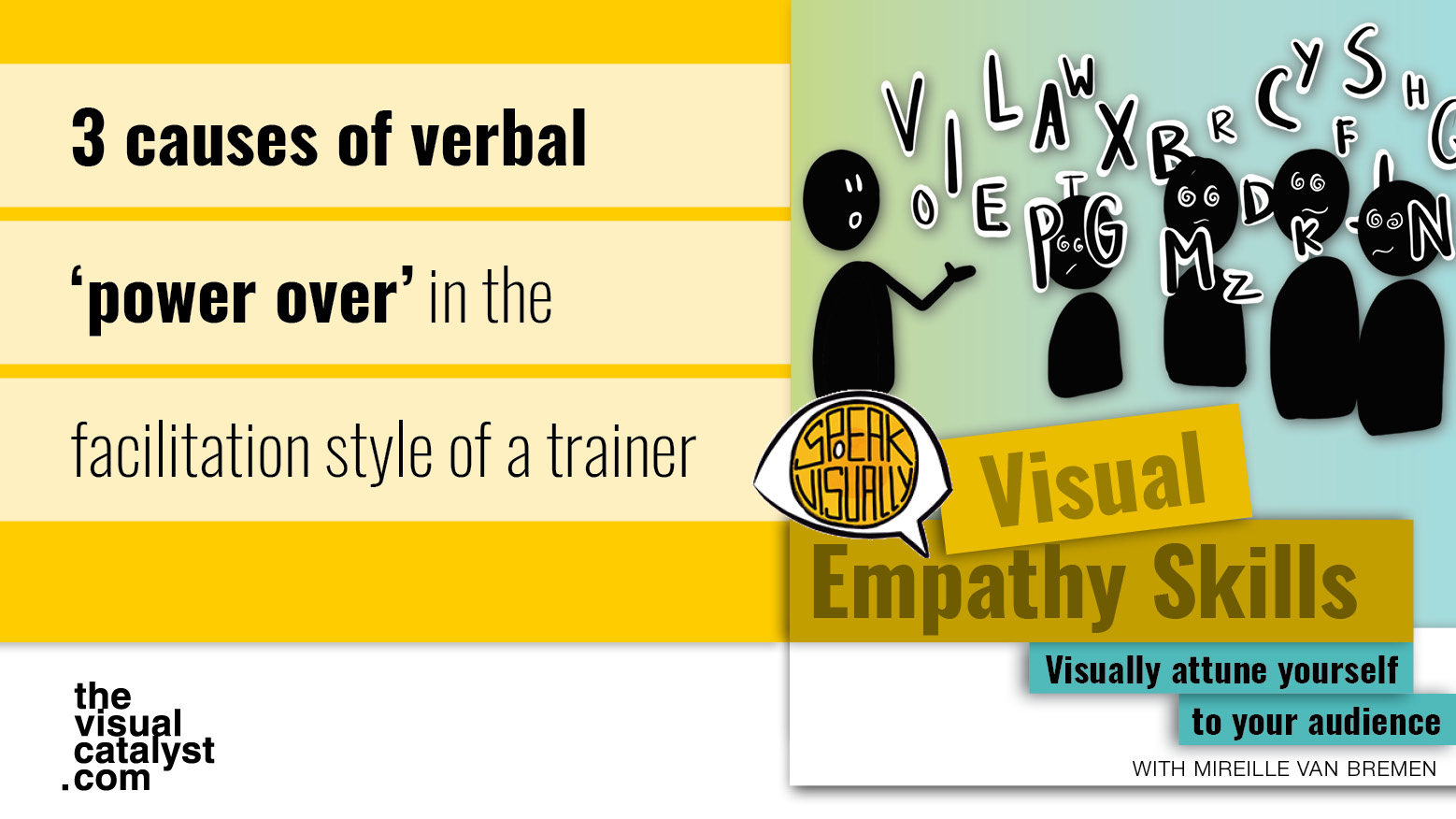 Have you been a student to a professor, or a participant to a trainer who had excellent knowledge to share, but somehow it was really difficult for you to integrate their valuable teaching. Did you ever discover what made it difficult for you before you became a trainer yourself?

There are various reasons for what made it difficult, but one of them is the gap between your learning style and the teaching and facilitation style. Another is that most learning environments are designed for the mainstream, the general public, and barely account the learning needs and communication styles of those who do not ‘fit in’ that group. The general approach of teaching does often time not include visual expression and the use of visual tools.

If you yourself depend on visual clues to learn, then you have an understanding of this gap. In my view this gap creates a ‘power over’ paradigm in learning environments. The participant / student at the receiving end, needs to work harder to understand, track and integrate. When the trainer does have awareness of this gap, uses sufficient strategies to close the gap, or even welcomes participants to visually express themselves, the paradigm shift towards ‘power with’.

As trainers we have a choice. We can either develop our skills to close the gap, or let the participant do the extra work – and let them deal with the discomfort and impact of our choice. While it is understandable that trainers offer their teaching in the way they enjoy, have skills for and feel comfortable with, we have a responsibility as a trainer to meet the participant in their learning needs, haven’t we? In my view we do.

I surely favour finding a balance between accepting ourselves / being authentic and which skills we can still learn, even if it comes with some discomfort. And I think there is quite some space here to be explored. Especially in the area of adding visual expression to our communication and while doing so, also use visual tools.

Growing our capacity to be (visually) inclusive to an audience that does not learn like the mainstream, is easier than many people think. And there are good reasons for it. We find the first clues in the challenges various participants face. Let’s have a look and explore also the impact and some strategies to what we can do about this. 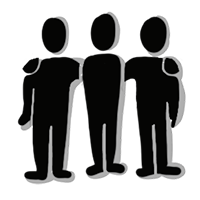 Various people are impacted by a lack of visual expression and visual tools used by trainers. These are the three main groups:

1 ➤ NON-NATIVE SPEAKERS
Non-native speaker are using a part of their brain space and learning capacity to bridge smaller and larger language barriers. This costs energy, effort and time and decreases their ability to follow the training as native speakers can do.

2 ➤ VISUAL THINKERS & LEARNERS
To no surprise I guess, the participants who have a preference to learning or thinking visually are impacted. Research shows it is some 60%, which is less important than knowing that every audience includes a significant group of people who need to see what we mean in order to follow, understand and integrate what they learn.

3 ➤ PARTICIPANTS WITH SPECIFIC LEARNING (DIS)ABILITIES
Werther the impairment / disability is caused by brain damage through an accident, trauma, medication or if a participant was born with special talents or with a disability, these participants have specific learning needs most people never even think of. Sadly this group of participants faces multiple or a life long challenges in getting their needs met in (mainstream) learning environments and must often be assertive because they are not met with empathy and consideration. Not to mention tools that can help them are not present. 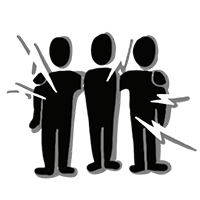 THE IMPACT ON THESE PARTICIPANTS

Some of the impact when not using visual language and visual tools is going to be emotional. Consequently, some or more of their needs are not going to be met. Here are some of them …

1 ➤ Participants may feel overwhelmed and tired after our training because they learned less than they hoped for. Instead of being met with support and understanding for their learning style, these participants spent their energy, effort and time to close the gap between your teaching and their learning style.

2 ➤ Participants may feel disappointed, discouraged and unsatisfied because the effectiveness of the training is compromised (for them and not for those who’s learning style is attended to).

3 ➤ Participants may feel frustrated, perhaps even angry that they had to work much harder than others and their output was reduces while everybody made the (same) financial contribution to attend, which may not meet their need for ease and fairness. 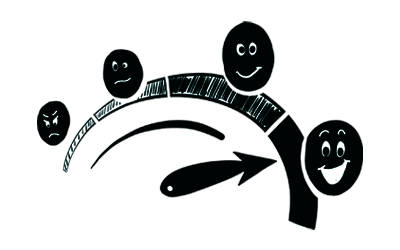 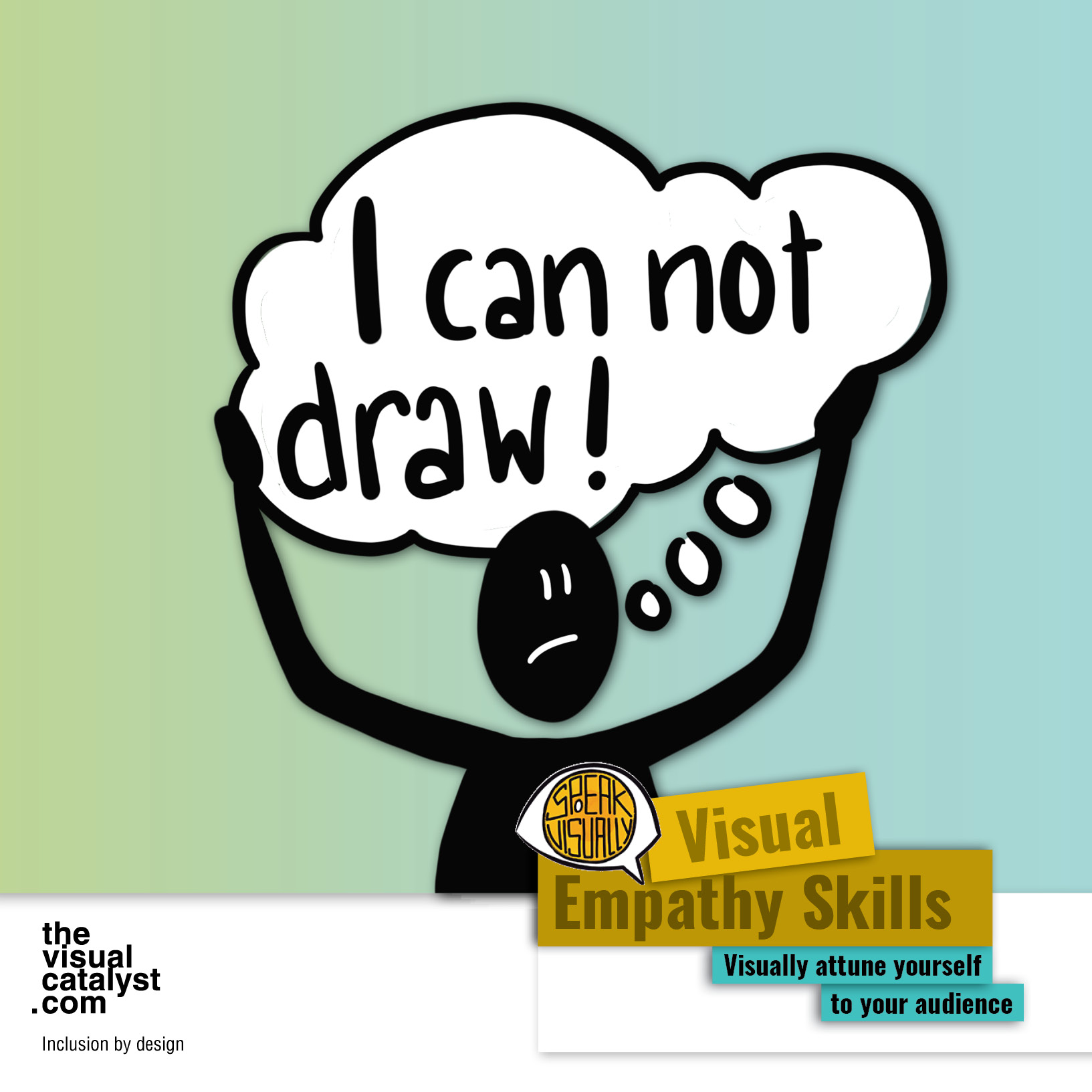 We have all grown up in environments that were less or more supportive to developing visual skills from an early age, and using our visual voice throughout life in various settings and situations. Differently said, some people learned to draw and be visually expressive (freely or according to instructions), others have not had the opportunity due to a variety of reasons such as a lack of materials, support or a prohibition to be visual expressive.

Whatever your experience was, the amount of structural power we grew up in was directive for the belief you developed. Is the belief we hold on to along the lines of ‘I have no talent’, ‘I can not draw’, we may feel scared and not express ourselves visually and as a trainer, never even lift a marker to write on a flipchart. Believing ‘others are better’ might still enable us to write on a flipchart or create some slides for a digital presentation but we probably feel unsatisfied or embarassed. Have you grown up in an environment that was supportive or you simply find joy in drawing, then you might believe something like ‘this is fun’, ‘I got this’ or ‘let me show you what I mean’. In this last case you probably feel at ease, joyous or inspired.

There are many situations in which visual expression is not all that important to be understood by others in the way want to be understood. But in a learning environment such as your training, including visual aspects in your communication, can make a huge difference. In my view, by not communicating visually, we keep the same systemic power in place as we may have experienced as a child.

The biggest cost to that is, that we limit our own possibilities to be understood in the way we like and we become less accessible to those who need besides verbal and non-verbal communication, also visual communication to be able to learn from us as a trainer – unless they work harder than others in the group. 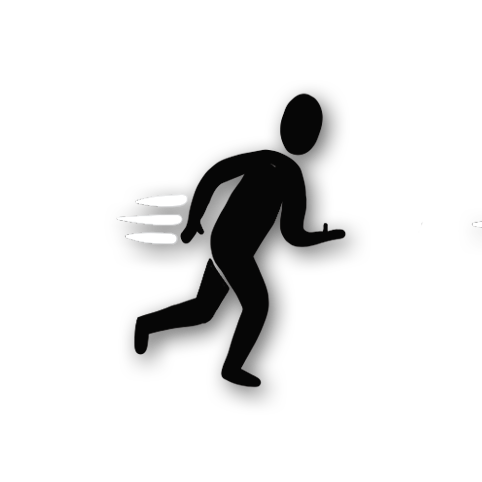 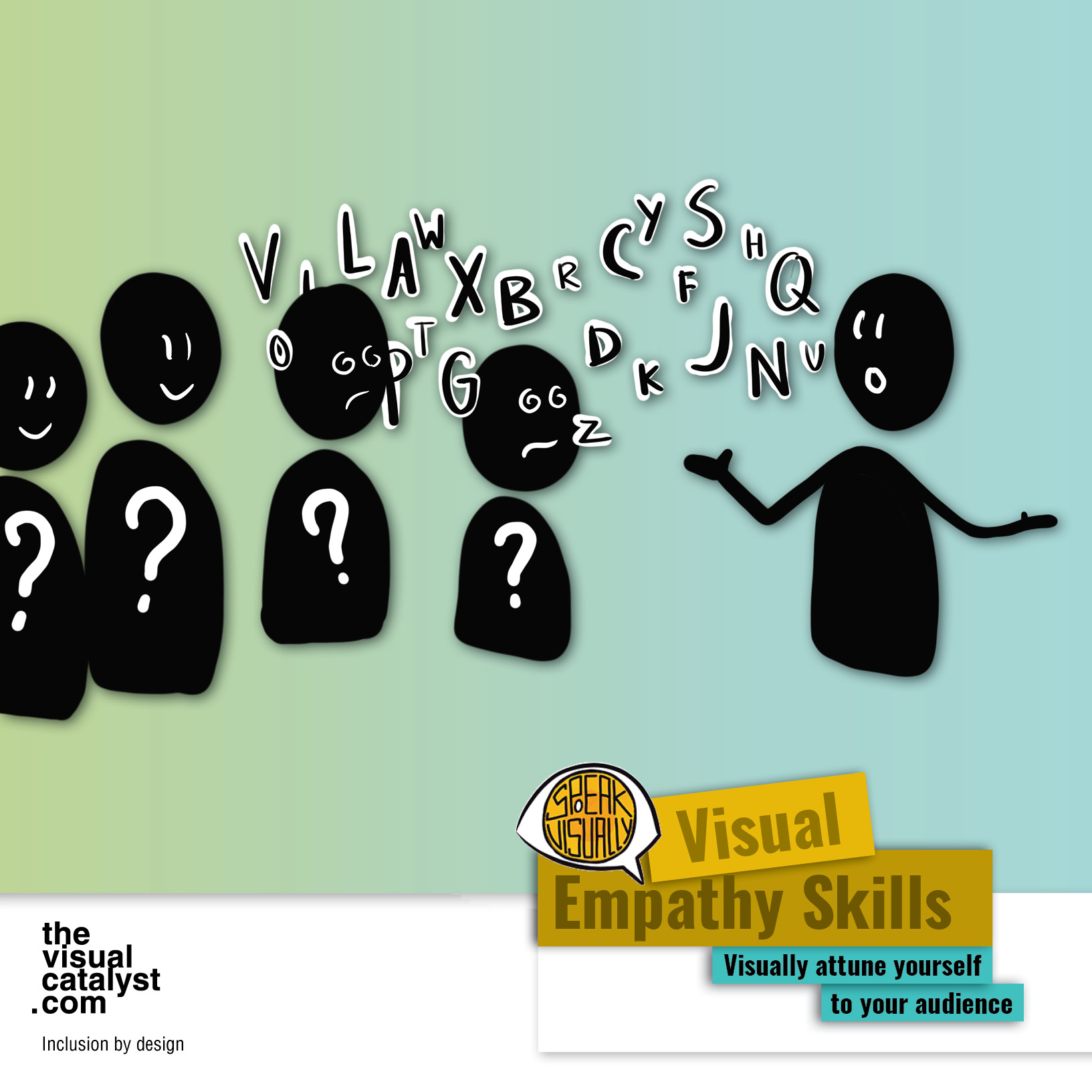 Forming connection and reaching (mutual) understanding requires empathy and communication skills. While connection and (mutual) understanding, just as empathy and communication, are important in a learning environment, it is not enough to meet the learning needs of your audience. In order to meet those needs as well, we need to have a clear picture of our audience, their learning needs & style, their communication style, their visual world and many other kinds of information specific to that audience.

Visual empathy helps you create a clear picture of your audience(s). This clear picture matters because it provides clarity about the (potential) gap between what we offer and how we offer it, and how our offer (teaching) is received by our audience. Next we can come up with strategies that may work to close the gap for your specific audience.

Though the process to creating that clear picture is not something I can offer in a small tip as this one, it is possible to make a start by: 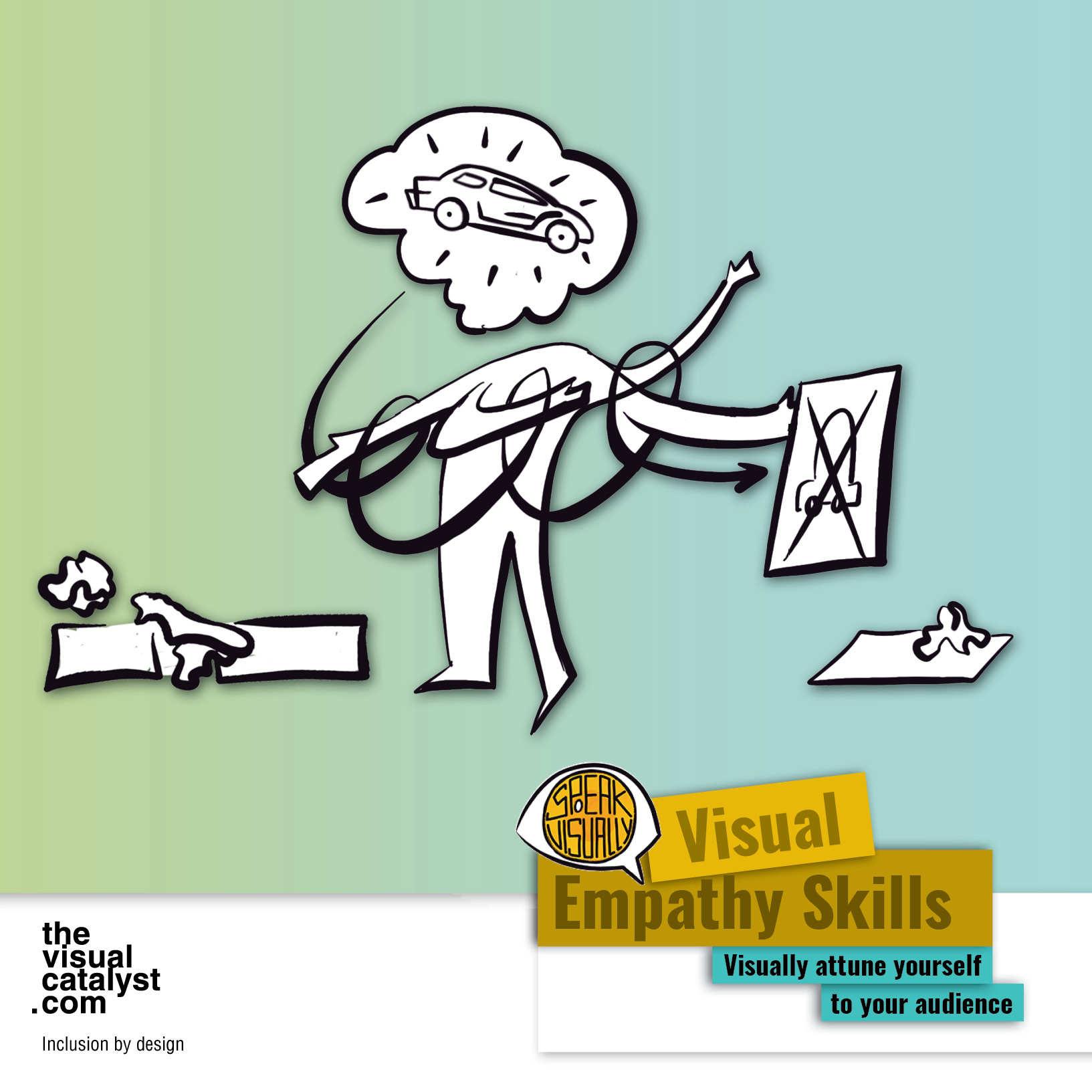 Visual language, never heard of it. What is that? In short, visual language is the combination of words, shapes and visuals used together, refined with style elements (such as color, shadow, thickness, …) and expressed through a layout.

You haven’t heard of visual language, nor did you learn it because it isn’t taught in schools. Yet, it is powerful and extremely useful to communicate with the audience named above.

1) you get to express the message in your head on paper, a slide or other medium.

2) non-native speakers will understand faster because they see a part of the meaning through visuals, shapes and the way the message is expressed in a layout.

3) visual learners can grasp the concept at once and integrate the complete message in their memory.

4) those with learning (dis)abilities get a chance to integrate the message and meaning in less words, in their own speed and through various ways, verbal, non-verbal and visual.

Easy strategies to start with:

1) Learn visual language. This is the first thing I teach in my programs.
THIS blog goes more into the details.

2) Learn more about visual tools and start integrating them in your training. Think about where in your training flipcharts can support the process, the transfer of knowledge or harvesting. Could you make use of a larger poster as an overview of the training? Or visual templates to harvest insights, questions, or key learnings? Could you work with a card deck, games, puppets or other 3d objects, a dance floor or other tools that offer visual clues?

INSIGHT 1 ⚡️ Transforming our beliefs about our (in)ability to be visually expressive allow us to express ourselves visually with the use of visual language.

INSIGHT 2 ⚡️ When we learn visual language we can start creating visual tools for our trainings.

INSIGHT 3 ⚡️ Defining our audience and visually empathizing with them offers us insight in their needs, desires, pain, learning style and needs, communication style and also their visual world.

Do you want to learn how to create visual tools for your training?

Join the next visual empathy in person training on June 30 & July 1, 2022 in Rotterdam, The Netherlands. This 2-day training will help you to develop your visual empathy and trainer skills, enabling you to convey your message clearly and visually and to increase understanding and engagement during your training. Step-by-step. Easy. Effective. 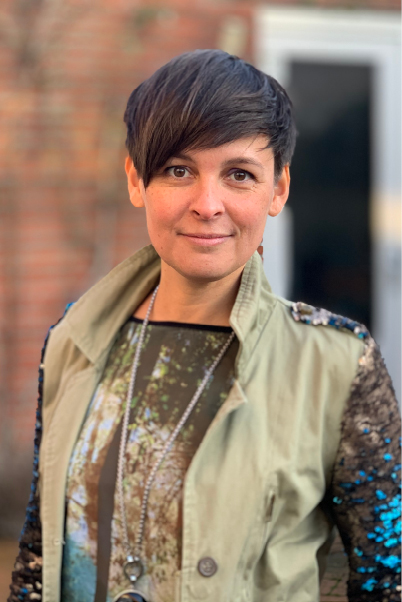 My name is MIREILLE VAN BREMEN

I help organizations and trainers to be visually attuned to their audience and offer visual expressions of understanding, with the intention to create connection.

Organizations hire me to visually empower their communication strategies.

Trainers and coaches join my visual empathy courses to increase the relevance and efficacy of their Empathic or Nonviolent Communication training programs.